In this workshop, we will focus on IoT devices, which are becoming more and more dependent on and expected to play an increasingly active role in an ever-changing social environment and discuss its security. Current threats and issues in the security of IoT devices that support not only consumers, but also various public services, industries, and services in the field of critical infrastructure will also be shared, and discussed how the latest TCG technology can contribute to security reinforcement and response, while connecting with the various globally advancing standardization efforts. Furthermore, the latest TCG technologies and how TCG can contribute to security reinforcement and countermeasures will be discussed. 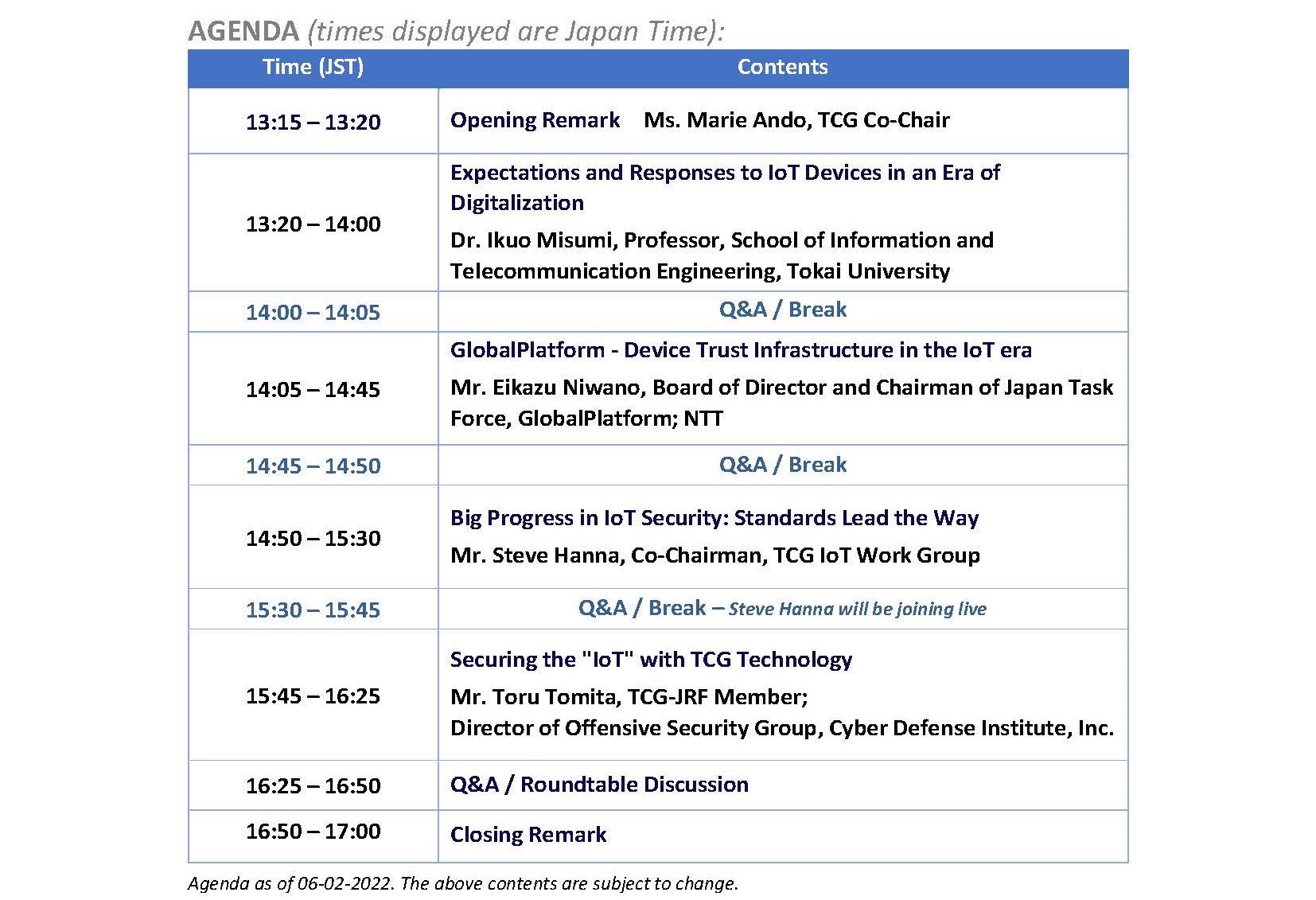 Dr. Ikuo Misumi joined Ministry of International Trade and Industry (current METI) in 1987 and until he retired in July 2020 he primarily engaged in cyber security policies and security export control examinations, for instance, enactment and revision of the Cyber Security Basic Law, planning of cyber security strategies, and response to major events such as the Japan Pension Service incident. He has served in his current position since April 2022. He was formerly Deputy Director-General of the National center of Incident readiness and Strategy for Cybersecurity, Cabinet Secretariat, and Deputy Director-General for Cyber Security and Informatization of the Ministry of Economy, Trade and Industry. He holds a Doctor of Engineering, MA in Management.
Session: Expectations and Responses to IoT Devices in an Era of Digitalization
As digitalization continues to advance, IoT (Internet of Things) devices and other devices are expected to further advance in quantity and quality in various aspects of the economy and society, including critical infrastructure and the manufacturing industry. While this will increase the benefits to the economy and society by fostering innovation and improving efficiency, it will also increase cybersecurity risks. This presentation will outline how governments, companies, users, and others should respond to this threat, leveraging experience in government administration and other aspects of cybersecurity.

Mr. Eikazu Niwano joined Nippon Telegraph and Telephone (NTT) Corporation and has been engaged in R&D and production of distributed systems, social information infrastructures, and information security applications at NTT Research Laboratory and Research Planning Division, which is the one of the company’s Strategic Management Divisions. Since 2005, he has served for the Board of Director of Global Platform, chairman of Japan Task Force from 2012, the Board of Director of Japan IC card group, and a member of the Government Review Committee, and earned a number of awards including the TTC Information and Telecommunications Technology Award (Minister of Internal Affairs and Communications Award). Currently, NTT Research Professor, Social Information Research Institute, he holds a M.S. in Mathematics, Graduate School of Science and Engineering, Waseda University.
Session Title TBD
GlobalPlatform has evolved from an IC card standardization body to a secure device standardization body targeting the IoT market. In this session, the latest status of its activities of the organization, expanding its applications and targets, from secure elements such as IC cards and SIMs to the device highly reliable execution environment TEE, trust IF, and device PF certification will be introduced as well as the collaboration with TCG, which continues to progress in this stream to be discussed.

Steve Hanna is a Distinguished Engineer at Infineon Technologies, responsible for IoT security strategy and technology. Beyond Infineon, Steve is co-chair of the IoT Work Group and Industrial Work Group in the Trusted Computing Group and a member of the Security Area Directorate in the Internet Engineering Task Force and co-chair of the Industrial IoT Security Work Group in the International Society for Automation. He has a deep background in information security, especially in software and systems. He is an inventor or co-inventor on 48 issued patents, the author of innumerable standards and white papers, and a regular speaker at industry events. He holds a Bachelor’s degree in Computer Science from Harvard University.
Session: Big Progress in IoT Security: Standards Lead the Way
In recent years, the world of IoT security has arguably stagnated in an unfortunate state that is complex, incompatible, and not very secure. Now new standards being developed in TCG and other standards groups are pushing the state of the art and of the practice far beyond what was possible before. As these standards are adopted, IoT security should reach a better and more uniform level. Yet we cannot be satisfied with these achievements. The attackers will continue to sharpen their tools and techniques. What has been achieved in IoT security and what is needed next? Specific details will be given, questions answered, and pointers provided for further research and engagement.

Mr. Toru Tomita joined Cyber Defense Institute after developing security software for derivatives, exchange trading systems, and major carriers in his previous career. He has extensive experience in diagnosing hardware, applications, networks, control systems, and critical infrastructure. Currently, he conducts strategic hacking as a field commander for security diagnostics, as well as providing advisory services from the perspective of a software architect/implementer and an attacker.
Session: Securing the “IoT” with TCG Technology
In recent years, the use of IoT devices has rapidly become widespread to make our lives more convenient and to support business productivity and quality. However, while the use of IoT devices has been accelerating, IoT-specific threats and security measures have not kept up with the demand, as revealed by recent security incident cases.
In this session, we will introduce IoT-specific security issues from a penetration-tester’s point of view based on our experience in security diagnosis of various IoT devices, as well as the intuition of security measures applied with TCG technology, with a demonstration.